Recently Apple decided to remove a central app for communication in Hong Kong, just to add it later again.

With this move Apple effectively disrupted the communication between people demonstrating in Hong Kong and at the same time endangered those who wanted to protect themselves from violance on the streets.

In this article I want to show how this problem can be mitigated by the use of IPv6.

In the old times of the Internet, every device in the Internet used to have a public IPv4 address. However when the number of devices began to exceed amount of officially available IPv4 addresses, NAT was introduced and it works as follows:

Many devices are hidden behind one Public IP address. So for a phone to communicate with another phone, it needs to connect via a central, publicly available IPv4 server. So in the end, the complete picture looks as follows:

How IPv6 solves the problem 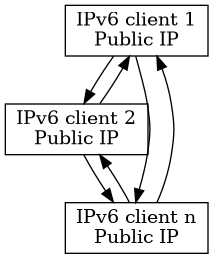 How to communicate with IPv6?

So how does it look like with IPv6? Instead of relying on a central entity (Apple in this case), you can directly connect to the phone of your friends. This way, you could even use your standard browser like Firefox, Chrome or Safari to write a message to your friend's phone.

At the moment IPv6 is picking up pace in deployment and ISPs everywhere in the world are moving forward with it. However, if you do not have IPv6 connectivity, ungleich provides IPv6 VPNs that enable you world wide to have IPv6. If you are an application developer, I urge you to checkout whether your application supports IPv6, because in the future you might enable people to talk to each other, just by supporting IPv6 now already.