Hello all! This is a followup posting of our table talk. In case you have missed our first introduction of the tables, you can check our previous posting IPtables vs. nftables.

Today we would like to introduce you to nftables and how to use it. In this posting we give you a step-by-step-tutorial so you can try the commands by yourself in your own environment!

A note: nftables is indeed a powerful and advanced tool, and our post today is a basic introduction, meaning we will not cover all possible configuration and command combinations: some of these topics will be covered later as separate postings.

Nftables is a package filtering framework in Linux. It was built to replace IPtables, a tool developed years ago, and connected tools. Nft is basically used to route and manipulate network packets, or the traffic in general. It defines what packages are routed to what point under predefined circumstances/conditions. For example you probably do not want people you don’t know connecting to your network. Instead, you probably want their requests to be dropped right away from the beginning. It is also good for setting up a private network, like the network of your tech community, and establishing a proper permissions structure. 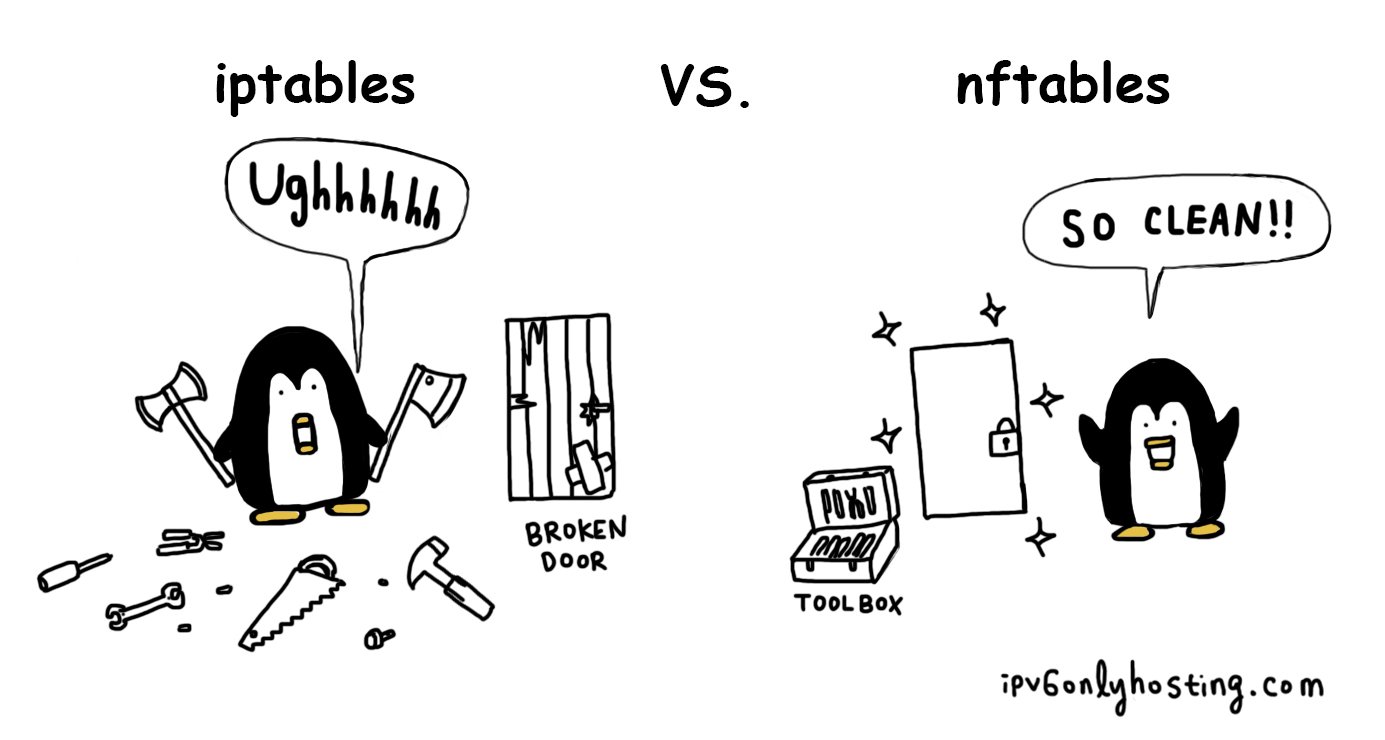 So let us get started. After this, you should be able to create a basic nft configuration.

First, you need to check a few things. Check if the nf_tables kernel module is available and check if nft is installed correctly. You can do so by calling: modinfo nf_tables. If everything works as expected, you get an answer like: 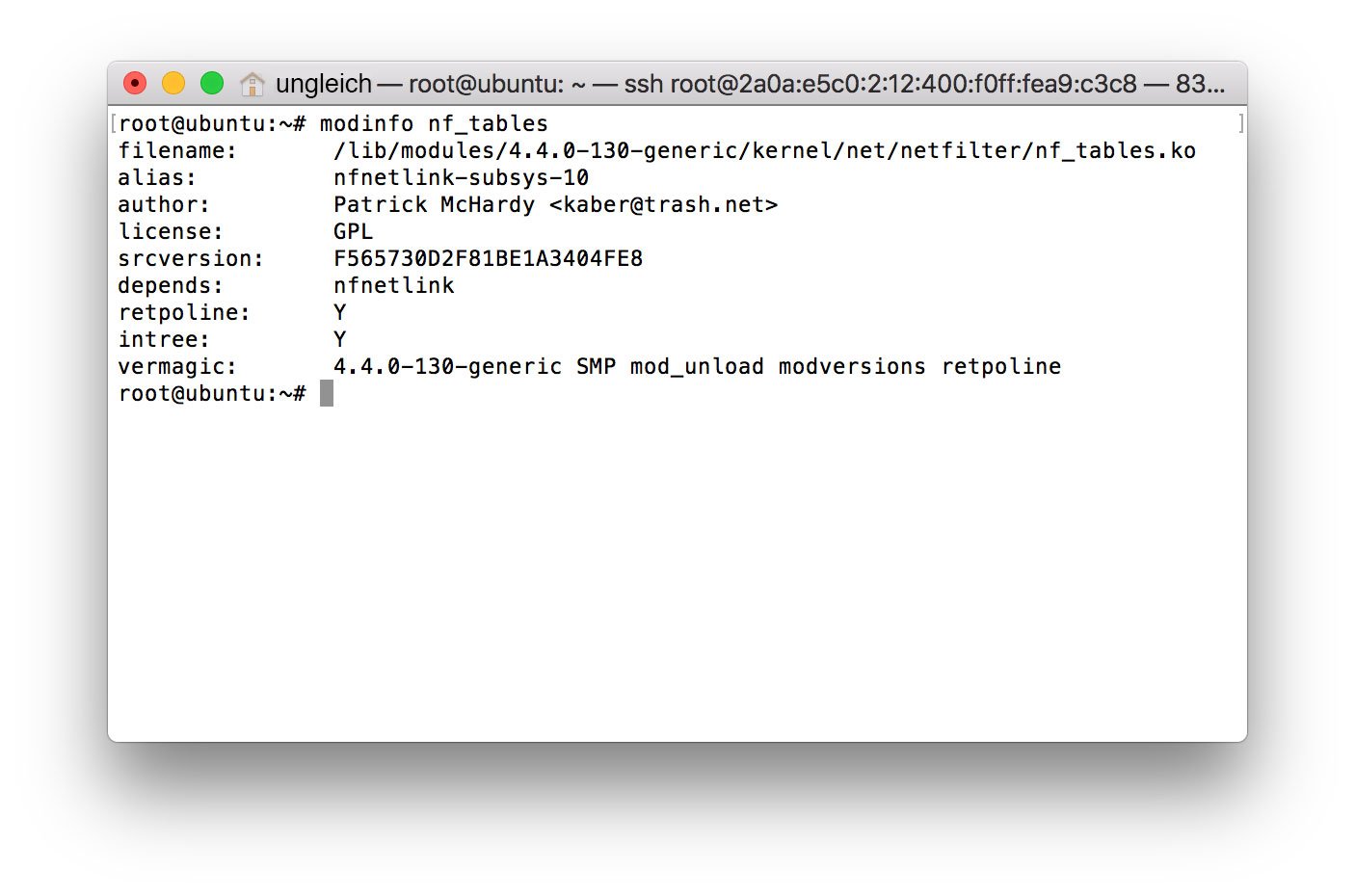 Also make sure you have IPtables disabled, by calling iptables -F.

The structure of nftables is pretty easy: there are tables, chains and rules. The tables consist of chains and the chains themselves consist of rules. nftables syntax is different from IPtables syntax. All commands start with „nft“ and an action (add, delete, list, flush), e. g. nft add. Syntax is as follows:

So let’s start with the tables.

You can use the following commands.

Address family inet combines both IPv4 and IPv6 for simplification. Speaking of simplification: it is possible to define variables to reduce redundancies, which were a big issue in IPtables before.

For example if you want to address one or multiple interfaces, you can easily map them to a single variable name:

Let’s get to the creation of chains. As said above, a chain consists of one or multiple rules and they are of a predefined type (base and non-base). Base means that the chain has a hook in the kernel so the traffic is exposed to this chain. It is not exposed to a non-base chain. You also have to define a hook, input or output, meaning incoming or outgoing. You add a new base chain to the table foo with:

The type can be filter, route or nat. The filter type is used for filtering, like its name indicates, and supported by address families ip, ip6 (inet), arp and bridge. Route is used to reroute packets if for example the packet mark gets modified. And nat which is used to perform Network Address Translation (NAT).

Defining a priority is very important because it defines the order of the chains and if you have several chains in the input hook you can influence which chain is traversed before another.

As we have created our first table and our first chain now, it’s time to fill the chain with rules.

There are no limits to your creativity. This rule was kind of simple but you can also create complex ones by concatenating expressions.

After you know the basics, it's time to put the basics into use. A cool first use case would be, say, configuring a webserver. Sounds fun? Let's get to it.

So what we want to do is configuring a simple webserver, and we want to do it right. Our goal is to make it more secure by dropping unsolicited connections and requests that can potentially harm our infrastructure, while still allowing safe and recognized connections.

We also want to allow ICMP pings, connections to our OpenVPN service and we of course want to be allowed to connect to our server via SSH. For our webserver to function, we need to open ports 80 (for HTTP) and 443 (for HTTPS/SSL), so that others can connect to our server and see the content. And last but not least we want to drop everything else that we do not explicitly allow. That's about it. Quite simple, wasn't it? The configuration should look like this:

You may have noticed that we didn't cover IPv6 with this configuration yet, as it solely mentions ip address family and therefore IPv4. Of course you could simply copy the above rules, change a few things (e. g. ip to ip6) and paste it again for IPv6 coverage. But instead you want to have a single configuration for both address families to avoid code duplication.

Code duplication was a problem of the predecessor of nftables, IPtables, like we have mentioned above and in our previous article of this series.  If you have closely followed the tutorial, you might know that "inet" address family in nftables covers both of them and it is easy to combine everything in a single ruleset:

Comments were omitted mostly because there is no big change compared to the other ruleset.

Put it into real use on VMs

Hey, you've made it this far - congratulations! Now you're able to configure a basic webserver with nftables. Super cool! Still hungry for some facts about nftables? We have prepared some useful tips and a Cheatsheet below.

A bonus: useful tips and Cheatsheet

It is possible to add rules directly to whole networks. For blocking incoming connections from a network, you could for example write:

You can simply delete all rules in a chain by calling:

Flushing the whole chain (Flush/delete all rules from the chain):

Sometimes it can be useful to export the nftables ruleset, so here are the commands for both XML and JSON format:

A closing tip: for using nftables for IPv6 VMs, you can check out IPv6 only hosting options - at ipv6onlyhosting.com, VM prices start by only 2.5 CHF/Month. An easy start for prototyping and testing your next cool project with nftables.