2019, now our daily life is unthinkable without digital data. Reading and writing email, streaming music or watching videos online, sharing photos, reading things online like "How to run a really green datacenter" on your favorite browser. And, if you are reading our blog, chances are that you are deeply involved in handling digital data more than an average person. But how often do you think about the physical reality of your digital data, or cloud?

The relationship with the cloud and its user is in a way similar to shopping at the supermarket meat section. A regular customer buys the nicely-cut clean products, but she mostly does not get to know about what happens to the animal the meat came from. Because only the surface is exposed to the end-users. Pretty much the same for the datacenters and cloud users: the end-user rarely gets to see what happens beyond the terminal or the browser.

Our belief at ungleich is that when we know more, we can make better decisions for all of us. It's important to know where things come from - that's why we want to talk about the environmental impact of running a data center.

What you need in running a data center

Let's start by checking what it takes for running a data center. We can break it down in four easy steps.

Environmental impact #1: Growing number of new servers in the world

A server is a machine in the end, and it requires resources to be made. The plastics used in servers are made of fossil fuels, and many of the components are made of rare minerals, which is a source of a number of problems: opening up ground for mining rare minerals disrupts the ecosystem, and the process of refining minerals releases contaminants such as radionuclides, dust, and metal. The problem doesn't end there: once extracted and refined, the products made of rare minerals take hundreds of years to decompose. At the moment of this blog writing, 20,879,643 tons of electronic waste are being thrown out worldwide, and the number is only growing. 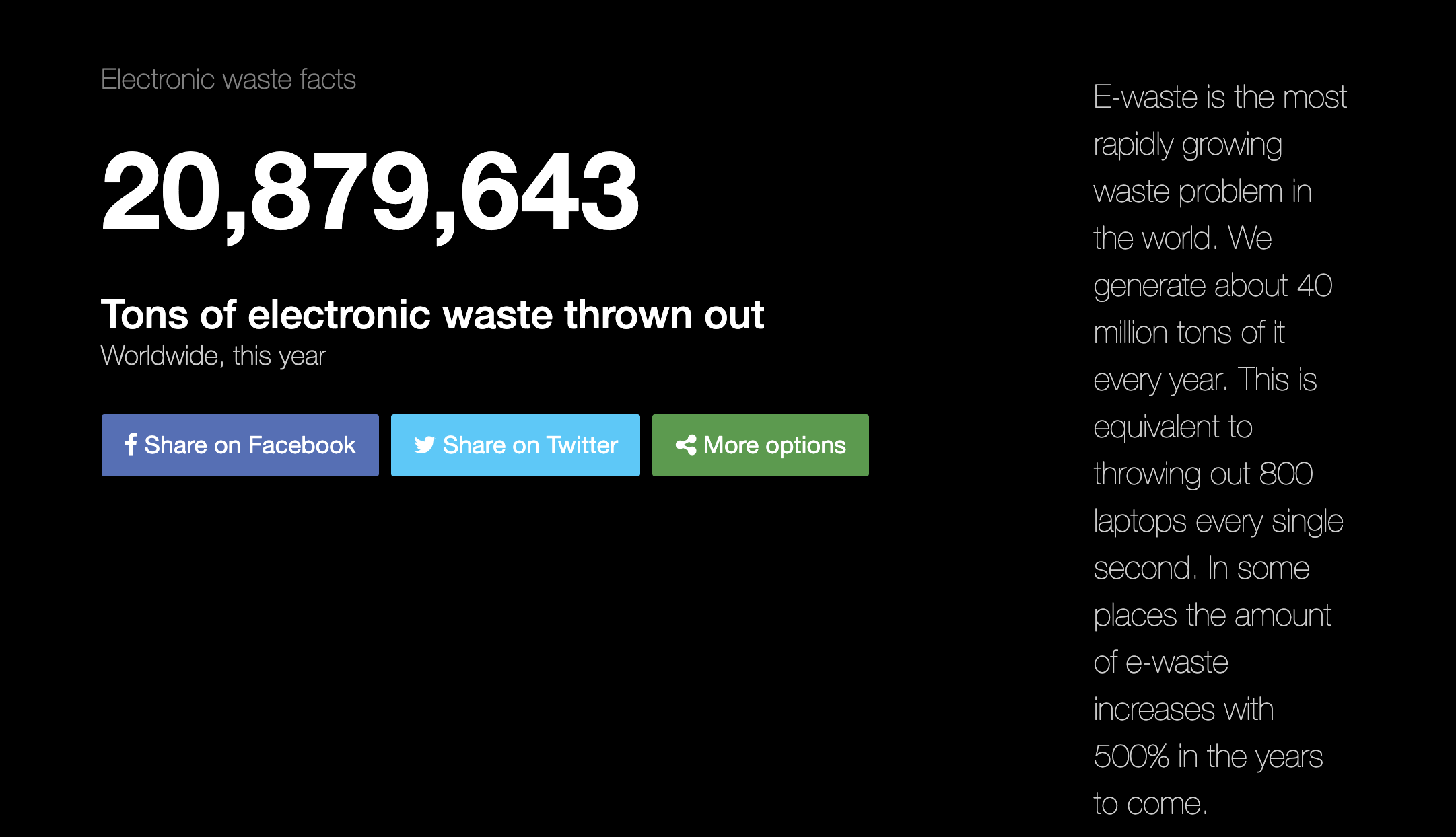 How can we avoid this? Our solution is not buying new servers, but reusing old servers. We only opt for second-hand servers at Data Center Light, because we do not want to add yet another new server being made into the world. Instead, we extend the lifespan of servers already out in the world and delay another server going to the landfill. 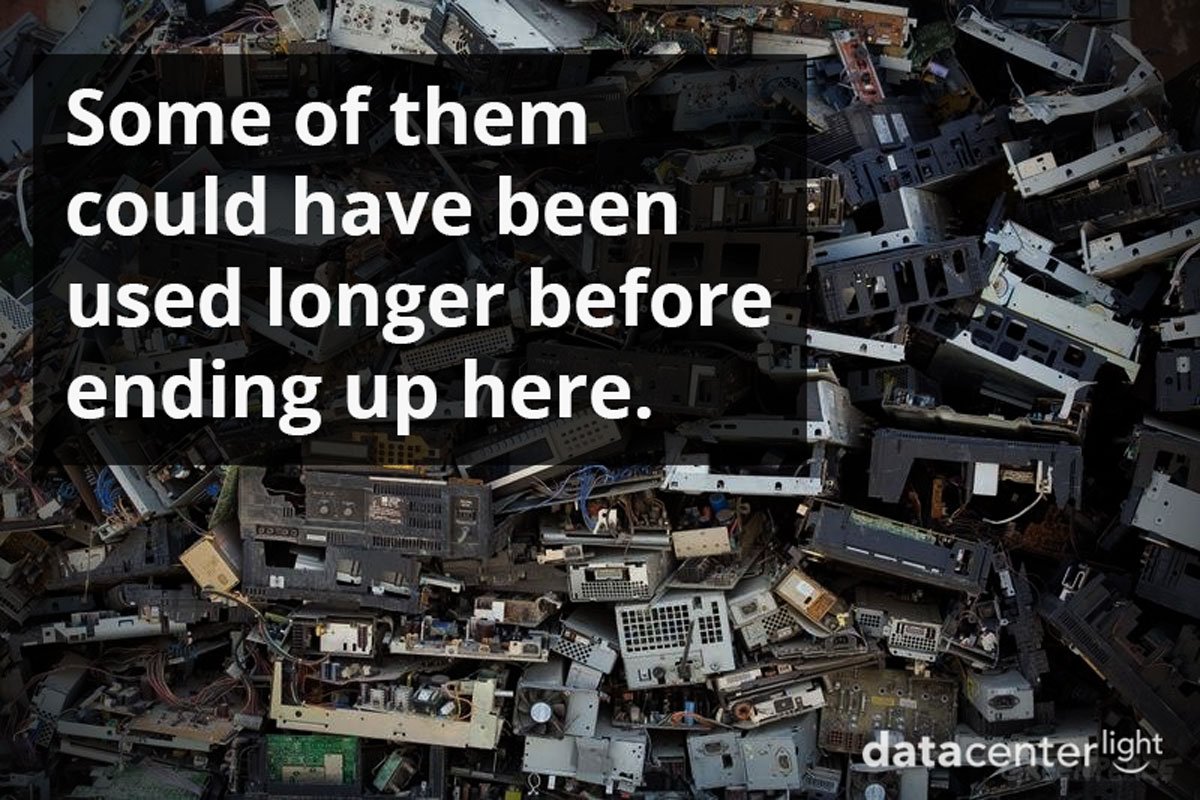 Environmental impact #2: A space for putting your servers

We are not only a fan of used servers, but we are also a huge fan of used buildings. Old factory halls that were built to last for many many years, to be specific. These big spaces built in the industrial era of late the 1800s and early 1900s fit our idea of environmentally friendly data centers. The infrastructure was already built and waiting to be reused and revived. 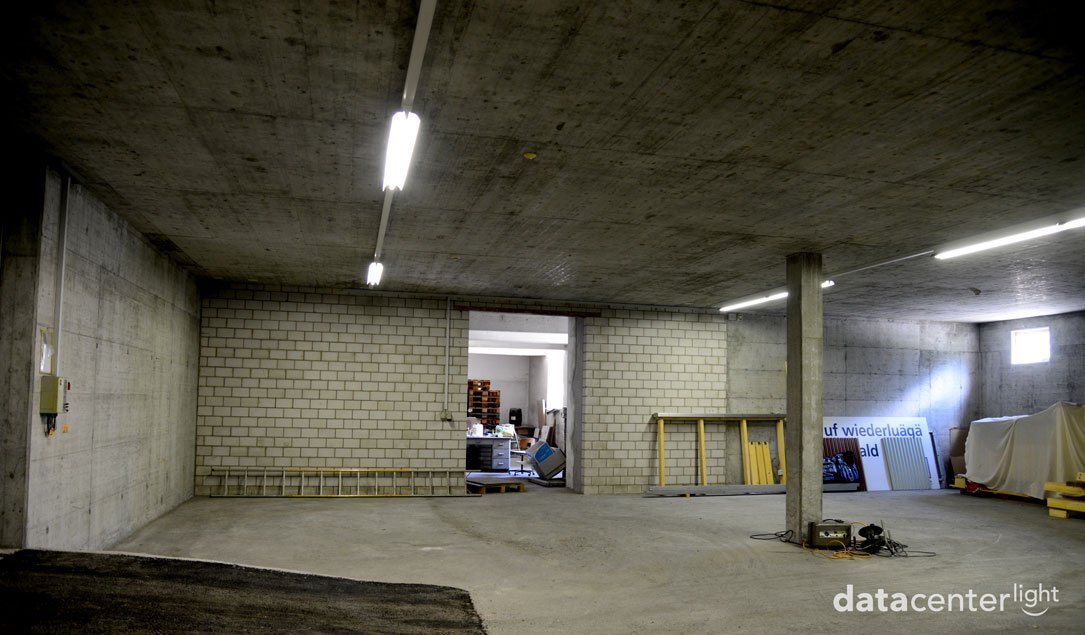 Why go for old buildings instead of building new? By going into existing factory halls and putting servers in them we save an enormous amount of energy and CO2. Newly constructing equivalent big buildings requires making a new foundation, supplying the new building materials, transporting all the materials from various parts of the world, all results in only multiplying unnecessary carbon footprints we can avoid. 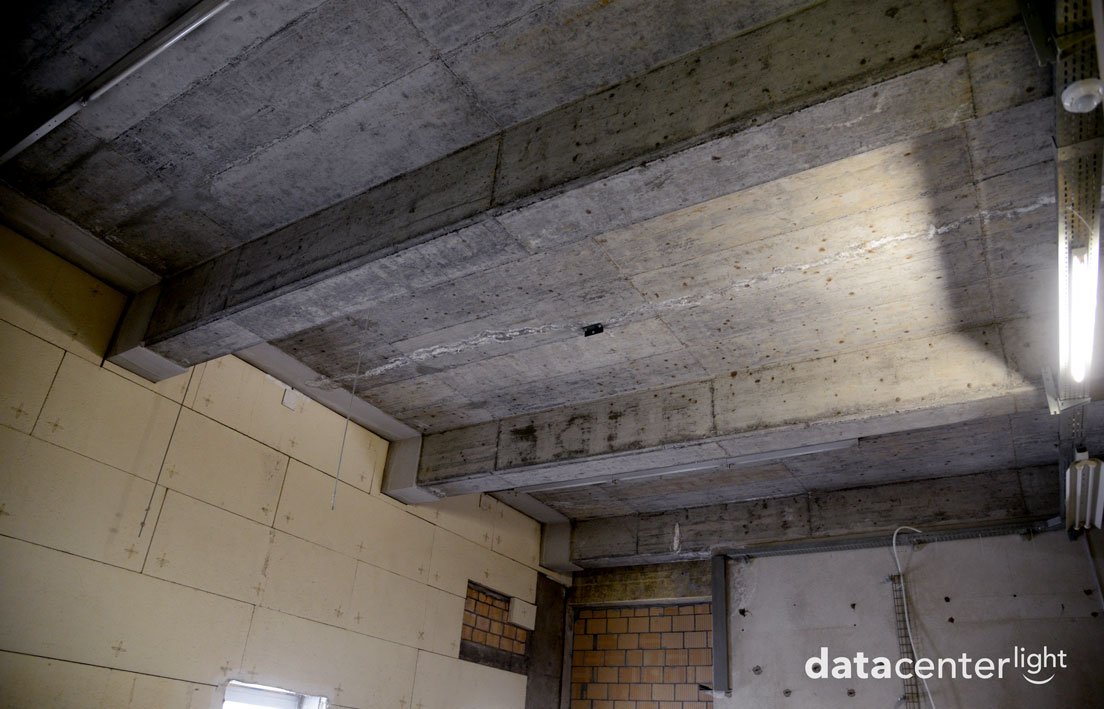 Reusing old buildings not only allows us to reduce the harm for the environment, but it also lets the old building full of history continue its life. If your region used to be industrialised like canton Glarus, there are many old factory buildings with great potential for being reused, and we get to save them from being torn down and disappearing from our world.

Environmental impact #3: Run your server, but with what energy?

So you got servers, and they are put into space, then what you need is electricity to run the servers. Servers are expected to run 24/7 in a data center unless some unfortunate events occur. Because of this non-stop usage, power consumption in data centers is becoming a significant factor in a country's ICT (information and communication technology) electricity use case.

Source: The Energy and Carbon Footprint of the Global ICT and E&M Sectors 2010–2015

We need electricity, but where does it come from? Below graph shows today's power generation sources in Europe.

We love this graph because it is really interesting to see how the world is doing in the energy source in the last two decades. And because we are really proud to show our own graph next to it.

Our servers are running with 100% renewable energy from the river coming from the Alps. Back in the heyday of the Swiss textile industry, the abundance of Alpine water in the region was a key strategic factor for spinning and weaving factories being built in the region. 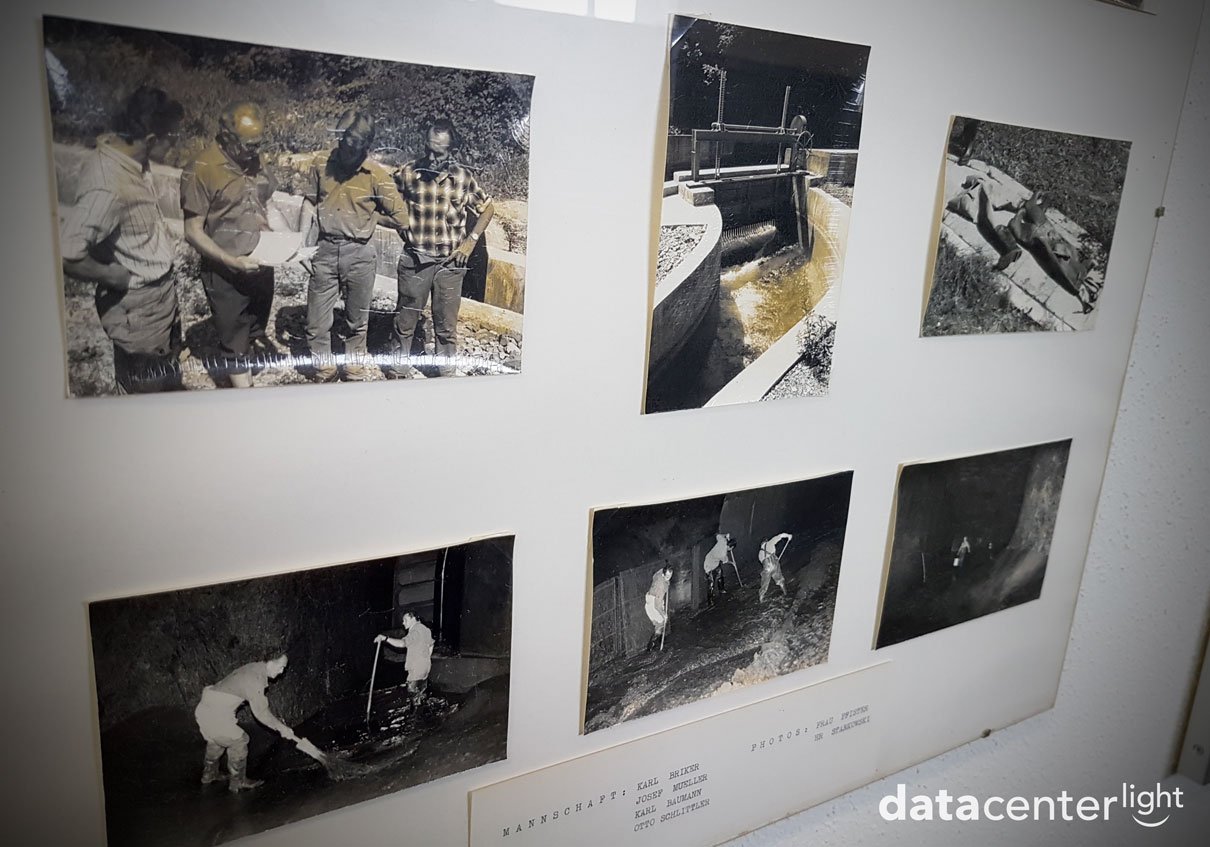 With the rise of cost of labor in Switzerland (or the decrease of the cost abroad) the textile industry eventually all moved to cheaper countries abroad, but the factory sites remained and so did the water powerplant.

"Hydropower is the most established baseload clean energy source. Sourcing energy for a data center from existing hydropower reduces carbon emissions and is more environmentally friendly than powering from a coal, gas, or nuclear powered grid."

Our own hydro powerplant is few steps away from where our servers are running because we are located in the former spinning factory, which depended on the stable price and supply of waterpower. 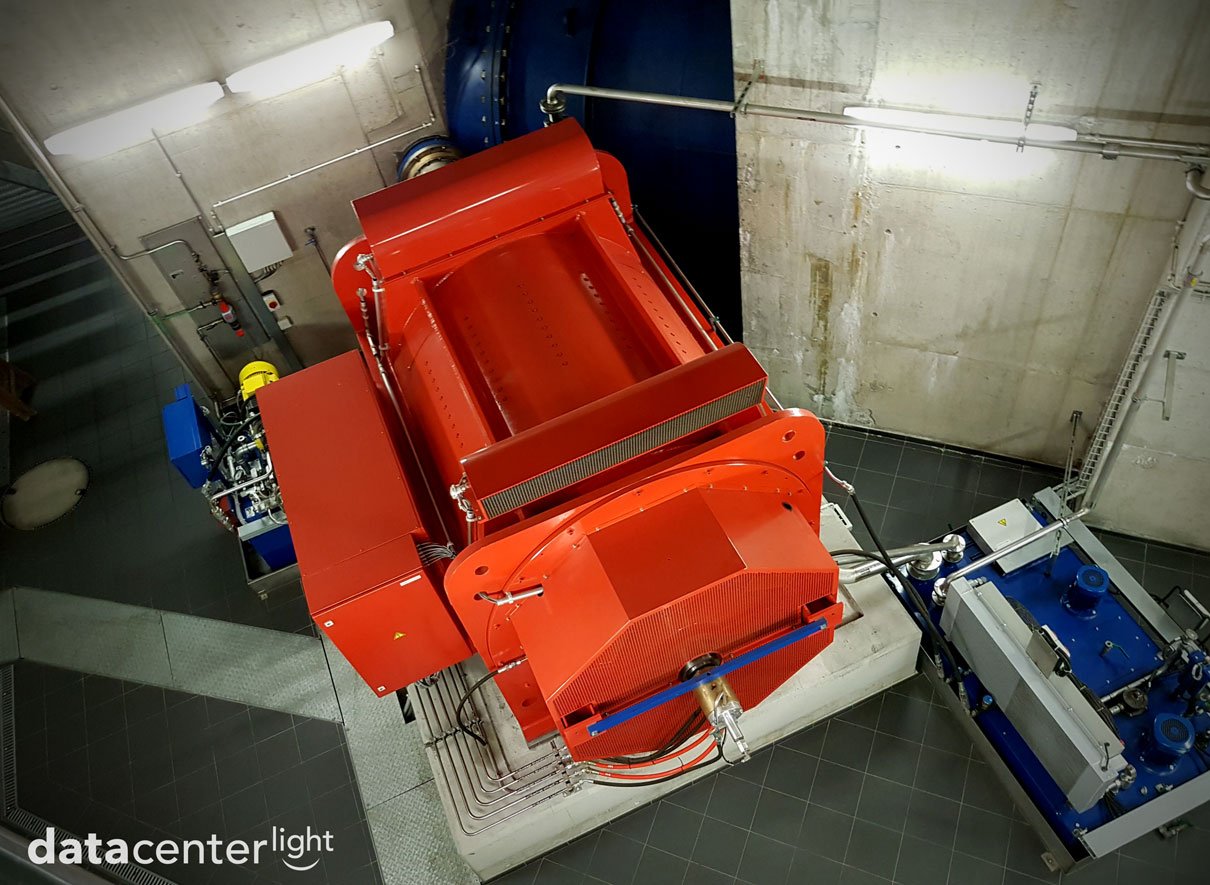 Servers generate heat while running 24/7, and in traditional datacenters servers are stacked in the server racks for the maximum capacity. Servers can malfunction when overheated from being tightly placed together, and that's why traditional datacenters spend significant energy for cooling. More energy consumption, especially if the energy is coming from non-renewable sources, leads to a negative impact on the environment. Cooling servers, ironically, can heat up our earth. 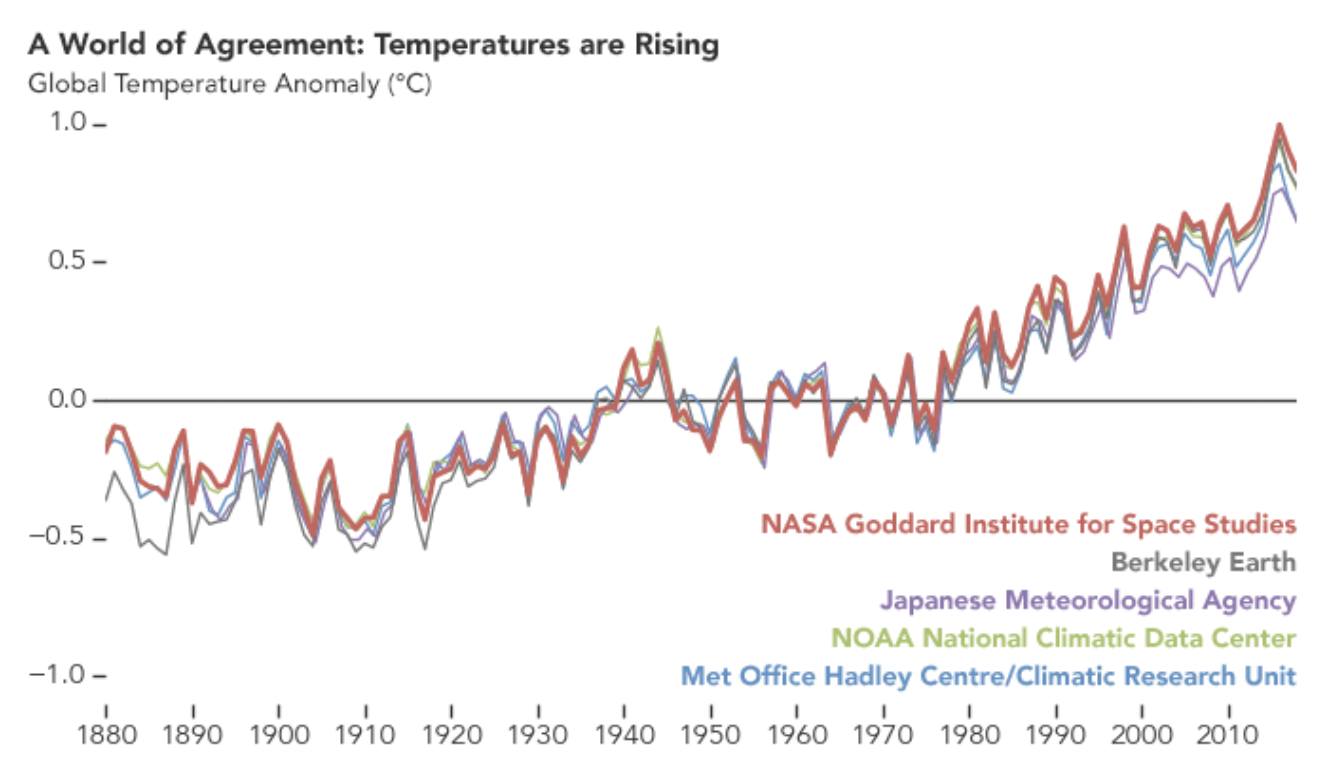 How to solve this issue? We approached the problem with a simple solution: instead of active cooling, we opt for passive cooling. Instead of traditional server racks which put servers very close to each other vertically, we allocate enough space per server so the heat can be distributed and eventually escape the room by airways without affecting other servers around. It is only possible because we are using big factory halls as server rooms. We have a lot of space, the servers do not need to be kept close to each other. Since the prototype of our data center, we have tested and analysed the temperature monitoring by IoT (LoRaWAN sensors) to find out the most fitting design for a passively cooled server room, and the result is saving energy and also reducing the carbon footprint. 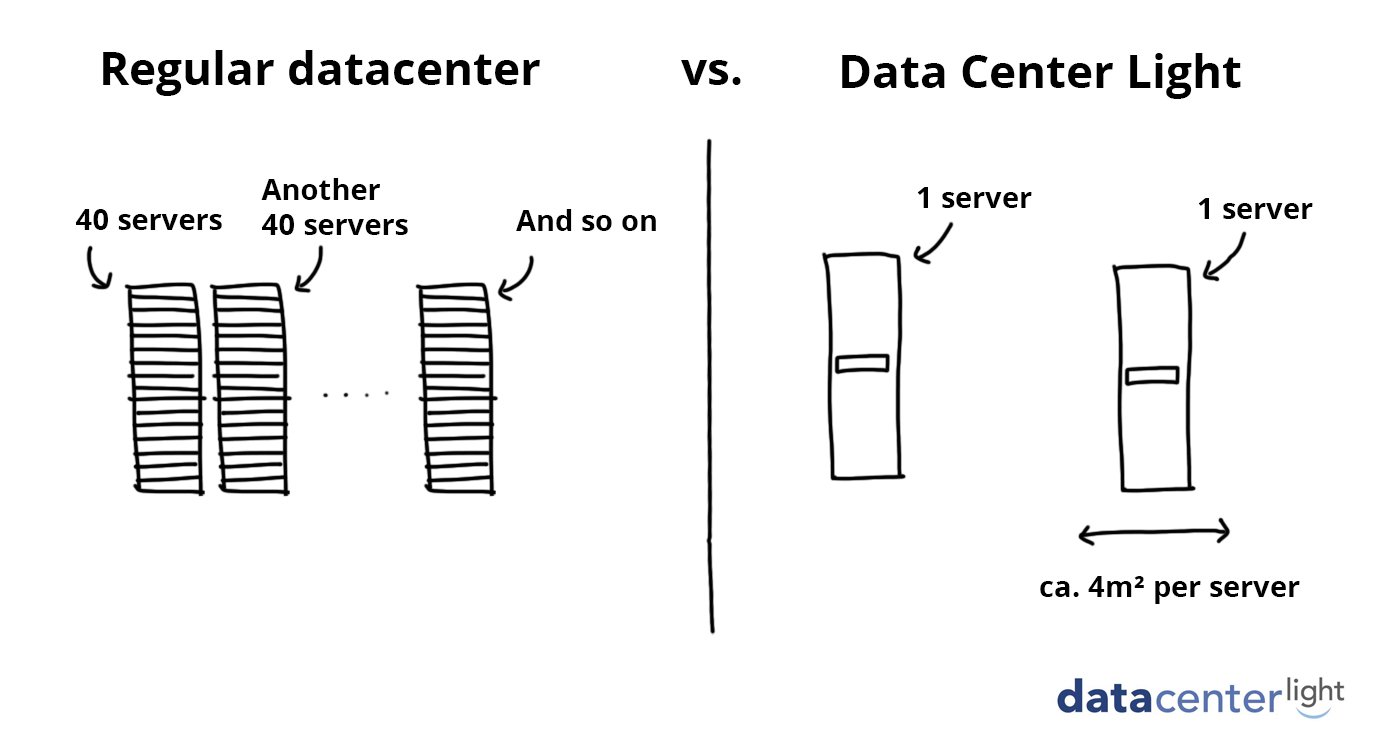 The solution is in creativity and commitment

At the moment of writing, we are having extreme weather in Glarus Süd this summer. Unprecedented hot weather followed by a lot of rain and storm, and temperature drop. Living the era of climate change requires all of us to take actions for change. Our belief is that everybody can make a change for the better in their choices. 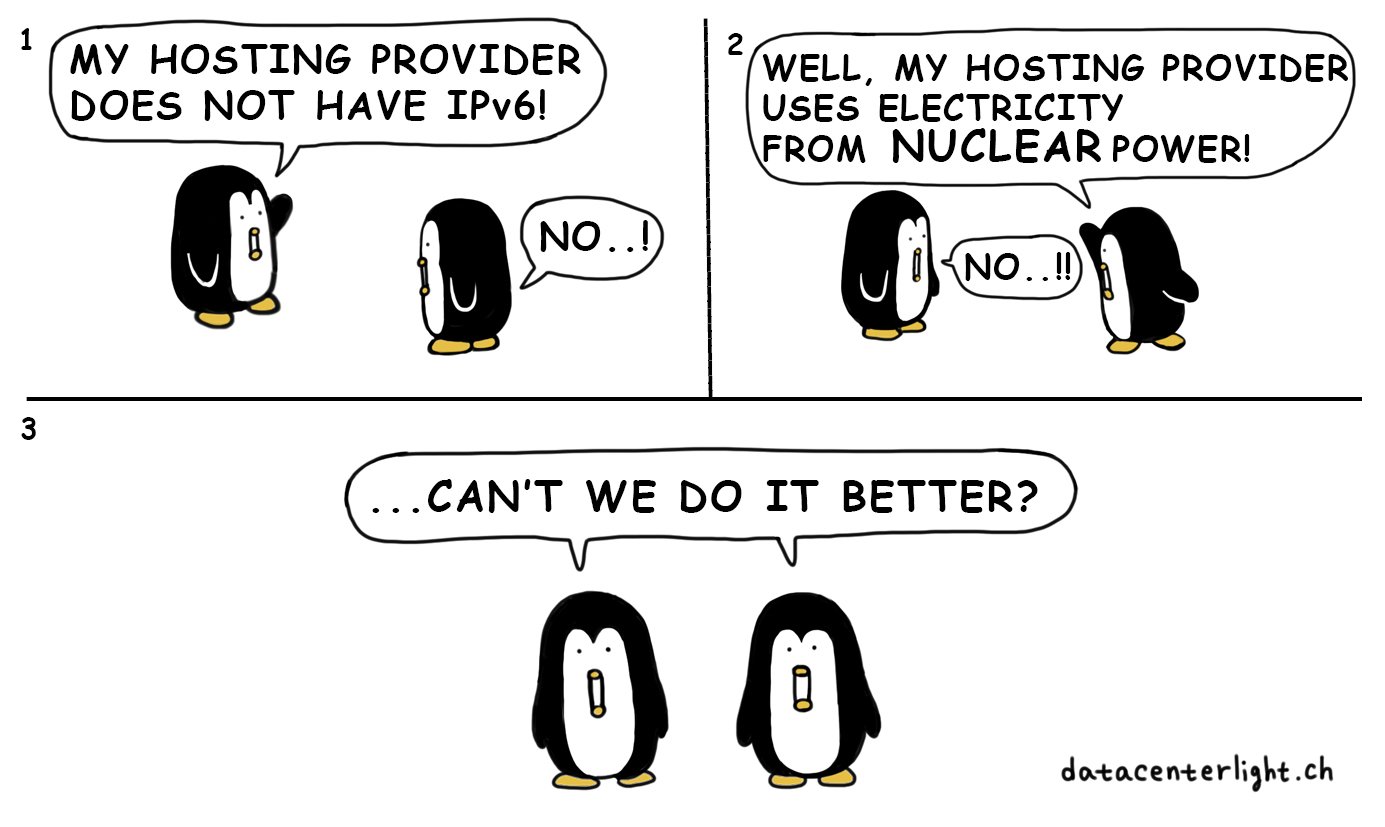 We are doing our part in running a datacenter as green as possible, by using used servers, used buildings, 100% renewable energy and passive cooling. We hope we provide a choice for users who are environmentally conscious and wants to not compromise their values. Do you have more ideas for going green? Let us know, you can talk to us via Twitter, or joining our open chat, or write us an email.